Simply tap on the coding Chips with the Smart Wand to begin your child’s journey of self-learning.

Taco line of educational resources enables learning 21st-century skills through hands-on tactile play and to have natural interactions between the player & the Coding toy.

Taco Playbits allows children to learn colours and also learn to mix colours providing audio and visual context for learning. The Taco Wand provides instant feedback for the child to embed their knowledge.

Children can listen to the alphabet and can identify a letter by using the Wand to tap onto pictures with the letter and the name.

This application can also be used for children with English as a second language and also for children to here regional accents. The Wand can be programmed to use any language so that a class learning Spanish can hear the sounds in Spanish.

Taco Playbits can be used to develop Computational Thinking (CT). Challenging children to work out how to solve logical problems. There are several layers of difficulty for the children to work their way through. The Wand provides vital feedback to enable the child to solve the problem.

Taco Playbits are also produced in Braille for those with partial or none sighted children. This allows the children to participate in learning through touching the chips which are embossed with braille characters.

Taco Playbits is a very useful resource for the classroom allowing children to explore independently and get visual and audio feedback to enhance their learning.

Robitixedu has received many accolades for their work in designing digital technology for the education market. They were an Awards Finalist at BETT UK 2019 in the first year.

Playbits in an exceptional device which can offer visual and audio support for independent learning but also can allow the child to experiment and explore language, numeracy and the world around them through colour and also begin to enhance Computational Thinking at a very young age.

We also saw older children who had been working very hard to create systems that could be helpful to society.

The girls have created their own Seismograph to show the effects of an earthquake. When the buttons were pressed the house vibrated and then the graphing began.

These girls show us how to save energy but still light up a street using light sensors and Led lights.

These two budding STEM ambassadors highlighted the plight of young people on buses. They devised a system to detect when someone tried to get into the window of a bus so that the sensor not only trigged an alarm but also informed the driver so they could sort out the problem.

These girls were very happy to talk me through the process and explain how they thought of the idea, how they planned and refined their system and how they eventually got it to work.

The girls explored electronics, construction and computer systems to solve real-world problems. This is just the sort of teaching we should be engaging our young people in.

Hopefully, in this British Science Week, we will have shown our young people the value of collaboration, the joy of accomplishing a task because they were resilient and also the ability to speak confidently about what they have learned.

These young ladies in traditional Gujarati costume set up a food business and served the guests of the school their local delicacies. They woke up at 4.00 in the morning to prepare the food and decorate their stall so that they could sell their produce. Combining entrepreneurial flair and culinary expertise to the STEAM agenda.

We would like to say a very heartfelt thank you to the staff and students o Shree Kadvibal Virani Kanya Vidyaley school (affectionately known as Kevi-Kevi).

The annual Bett Show is the biggest British educational training and technology show and will be held at the Excel in London this year. This immense exhibition brings together 850 leading companies and 103 new edtech start ups from all over the world. It is a fantastic opportunity to celebrate, seek knowledge and find inspiration about how innovation is changing the face of current education.

The mission of this event is to portray cohesion within the education sector and also teach one another about the modern technologies that are surfacing to give children and educators a new experience of learning, that enables them to fulfil their potential in their everyday work.

There will be talks held over the course of three days by various speakers. These will give you an insight into various companies and their technologies, to inspirational educational talks on how we as a society of education are shaping the future for upcoming generations. There will also be stands for each company, where you can get interactive with different technologies and learn more about the products that are available to enhance everyday learning experiences. More information about the show can be found here.

You can find Tyncan learning at stand A440 in partnership with Robotix. Come along and discover the TACO playbits, TACO robobricks, and PHIRO code. These are new technologies that encourage children from the ages of 3 to use technology as a source of fun, educational learning. More information about these can be found at the following website: Robotix

****COMPETITION TIME**** Over the 3 days that we are at the Bett show, you can enter into our competition by simply giving your contact details, with a chance to win a PHIRO unplugged.

Statement on Buddhist-led violence against Muslims in Burma/Myanmar 2017

As a Buddhist, I am utterly opposed to the encouragement of violence and discrimination against Muslims in Burma and elsewhere in the name of Buddhism. Violence and discrimination led by Buddhists against non-Buddhist minorities is also well documented in other countries, including Sri Lanka. There can be no Buddhist justification for such violence. To engage in or incite violence motivated by hatred and prejudice goes against the teachings of the Buddha and is a fundamental breach of Buddhist ethical principles, including Buddhist monastic vows. In particular, the five ethical precepts taught by the Buddha express the principle of ahimsa, or non-harming. They are an undertaking to train in compassion – in our actions, in our words and even in thought. Furthermore, the Buddha urged his followers to cultivate loving kindness – not simply for one’s family or ethnic group, but for strangers and those with whom we are in dispute. Accordingly

“The universe is beautiful to look at and even more beautiful to understand…If you look carefully there’s something deeper; everyone is perfect” Prof. Brian Cox

I understand the idea behind having a school uniform but this trend is in my view totally alien to any education system I would want to be part of. I have not been so upset by what we are doing to our children for a long long time. As a life long educator I am so saddened by this.

Hopefully all teachers are aware of this. However living in a digital world and also needing people who can program and work with developing new technologies it is important to have experience of technology as early as possible. The main take away for me in the article is that still successive governments have failed to invest in digital training for teachers. This has been the same since 1999 and the New Opportunities Funding (NOF) fiasco endearingly referred to as NAF training. We may well have elections to change parties in power but unfortunately who ever we vote for we get a government.

Is scoring high in the test a real reflection of how well our young people are doing? Do our students have more depth of knowledge? 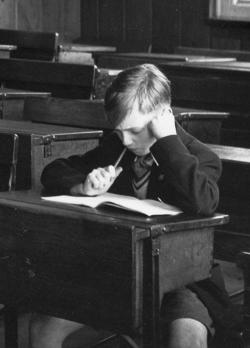 The year had been taken up with tests and re tests but now the results day was looming and the whole class was getting excited. We would know the results on Friday. The classroom was always laid out in rows facing the front. Yellow, Green, Blue and Red. The person who sat in the front desk of the yellow row was the best in the class. The person who sat in the desk at the back of the class in Red row was the worst. Every week on a Friday there was a test and on the Monday the class would change desks according to how well the test was answered. I usually alternated between red and blue row. The reason for this was that I would much rather play football and go out playing than do school work. ( However I did do these things with children in Yellow and Green rows?).

On the day of the 11+ results the Head teacher came into the room and asked the following people to stand up there were three of us. 2 boys me and John Williams and a girl Sarah Donaldson. We were asked to go and wait outside the classroom.

As we were outside wondering what was happening there was a great cheer from inside the classroom we three looked at each other and slowly the realisation of what was happening began to materialise in our heads although nothing was said.  The head teacher came out of the classroom and spoke to us saying that we had failed the 11+ entrance examination and that we were to take a letter home to our parents and let them know.

We wander out of the school the girl lived in the opposite direction so she set off by herself. John and I walked the same way for most of the time. We talked about what we would say, we talked about running away we held back tears as we walked. John turned right into his street and I wished him luck he nodded in return a look of hope that we would be OK.

I wandered dejectedly down my street nearing the house where my mother was busy doing the washing and the cleaning. So many times I thought about just running away, so many times I went through the questions I could remember and tried to work out why I had not put the correct answers. I had obviously had a my paper marked by someone who didn’t understand the exam! I opened the door and the look on my mothers face said it all.  She thought there had been an accident, thought the school had been blown up, demolished. She had a look of horror at the fact that I had been sent home. I gave her the letter she read it and put her arms around me comfortingly and told me that everything would be alright and that uncle Henry had not passed his exams and he was doing OK thank you very much. This made me feel better I had a cry resigned myself to failure and found a biscuit in the tin. The really hurtful thing about that day though was that as we three had left the school the teachers came into the class with sandwiches, cakes, pop and crisps and the rest of the class had a party to celebrate. Over 40 years later and I still remember that day. However like uncle Henry I have done alright, I have a BSc degree, a PGCE a Diploma and an MEd and I own an educational company. I would still liked to have had the party though.